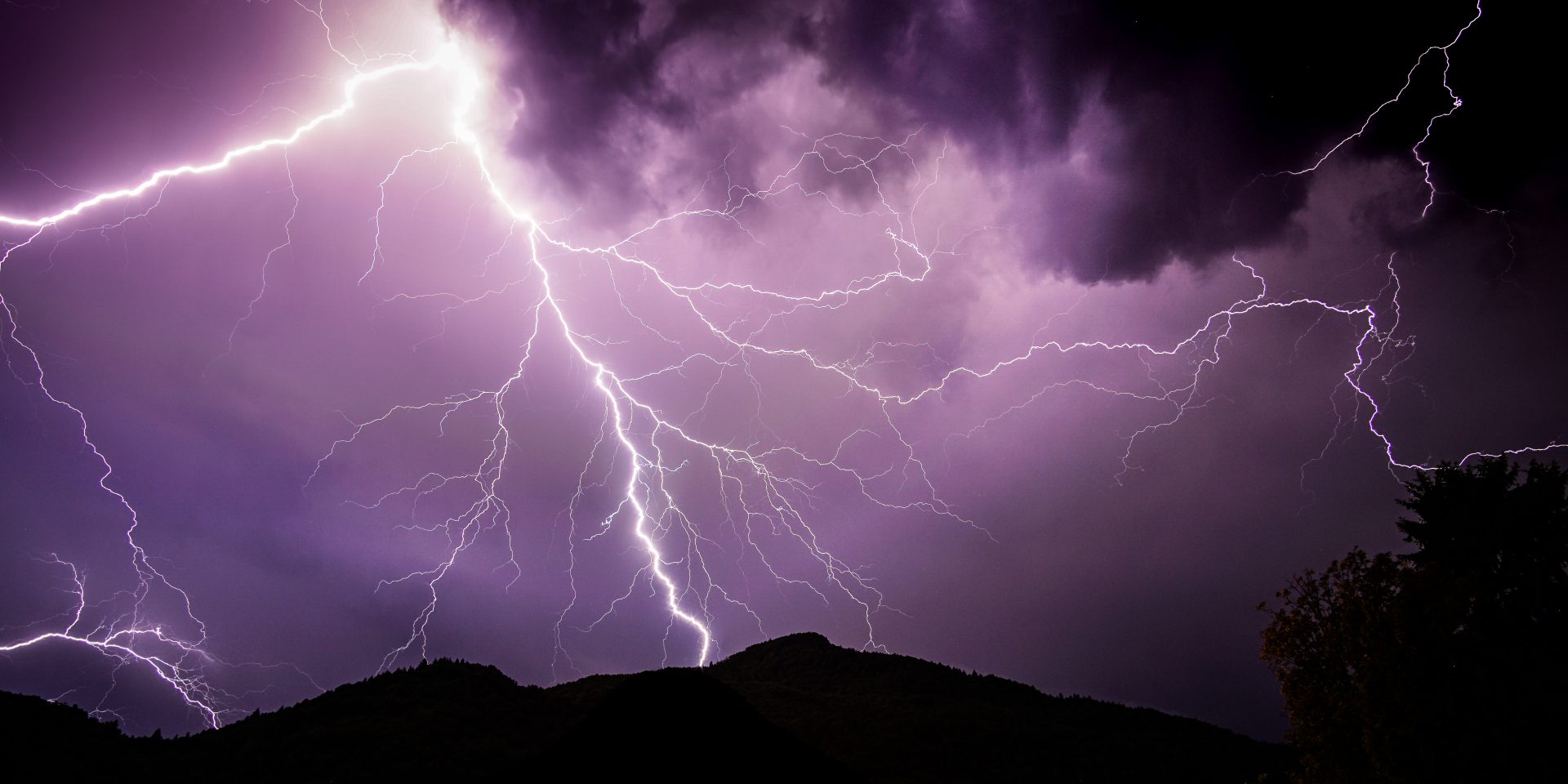 In the day of the second coming of the Messiah, which is at the last part of the second seal of Revelation, the heaven will be “divided like a scroll being rolled up”,

I watched as he opened the sixth seal…

The heaven was divided like a scroll being rolled up, and every mountain and island was moved from its place. Then the kings of the earth and the great ones and the generals and the rich and the powerful, and everyone, slave and free, hid themselves in the caves and among the rocks of the mountains, calling to the mountains and rocks, “Fall on us and hide us from the face of him who is seated on the throne, and from the wrath of the Lamb, for the great day of their wrath has come, and who can stand?”

Which means the entire earth will be covered in thunderstorms, which will cause the sun and moon and stars above to “vanish” by hiding them from the earth below by the dark clouds that will cover the entire earth, which will thus “divide” the heaven and cover the earth completely like a scroll covers its contents completely when it is rolled up, which is why the “day of the Master” is described by the prophets as a day of thick dark clouds,

For the day is near, the day of the Master is near; it will be a day of clouds, the time of the Gentiles it will be.

All the host of heaven shall vanish, and the heavens shall be roll up like a scroll…

But the Day of the Master will come like a thief. On that day the heavens will vanish with a great sound…

For just as it was in Mount Sinai when God descended on it, with thunderstorms, with the earth trembling, and with shofar blasts, so it will be at the second coming of the Messiah, but at a much larger global scale than just one mountain on the earth,

On the morning of the third day there were thunders and lightnings and a thick cloud on the mountain and a very loud shofar blast, so that all the people in the camp trembled. Then Moses brought the people out of the camp to meet God, and they took their stand at the foot of the mountain. Now Mount Sinai was wrapped in smoke because the Master had descended on it in fire. The smoke of it went up like the smoke of a kiln, and the whole mountain trembled greatly. And as the sound of the trumpet grew louder and louder, Moses spoke, and God answered him in voice.

Which is why the kings of the earth will be thrown into panic and will hide in their bunkers beneath the earth, for just as the sons of Israel were filled with fear at what they saw on Mount Sinai, so it will be everywhere on the earth when the Messiah appears from heaven, and many will wail from grief and terror, for all will know the appointed time of wrath has come,

Now when all the people saw the thunder and the flashes of lightning and the sound of the trumpet and the mountain smoking, the people were afraid and trembled, and they stood far off and said to Moses, “You speak to us, and we will listen; but do not let God speak to us, lest we die.”

And people shall enter the caves of the rocks and the holes of the ground, from before the terror of the Master, and from the glory of his majesty, when he rises to shake the earth.

Then will appear in heaven the sign of the Son of Man, and then all the tribes of the earth will mourn, and they will see the Son of Man coming on the clouds of heaven with power and great glory.

Behold, he is coming with the clouds, and every eye will see him, even those who pierced him, and all tribes of the earth will wail on account of him. Even so. Amen.

And then, after 7 and 1/2 days, which is a prophetic 1/2 hour, the angels the Messiah came with will begin to blast the trumpets, in correlation with the appointed time of the blast of trumpets of New Moon 7 Day 1 of the Torah, which is when it will begin to rain hail and fire on the earth, at the first trumpet blast, which will burn a third of the earth, a third of the trees, and all green grass,

When the Lamb opened the seventh seal, there was silence in heaven for about half an hour. Then I saw the seven angels who stand before God, and seven trumpets were given to them.

For the Master himself will come down from heaven, with a loud command, with the voice of the archangel and with the trumpet call of God…

In my distress I called upon the Master; to my God I cried for help. From his temple he heard my voice, and my cry to him reached his ears. Then the earth shook and trembled; the foundations also of the mountains quaked and shook, because he was angry. Smoke went up from his nostrils, and devouring fire from his mouth; glowing coals were kindled by it. He pitched the heavens and came down; thick darkness was under his feet. He rode on a cherub and flew; he came swiftly on the wings of the wind. He made darkness his covering, his canopy around him, thick clouds dark with water. Out of the brightness before him hailstones and coals of fire broke through his clouds. the Master also thundered in the heavens, and the Most High uttered his voice, hailstones and coals of fire. And he sent out his arrows and scattered them; he flashed forth lightnings and terrified them.

the Master will make his majestic voice heard. He will come down and show his strength, with indignation and anger, with devouring flames of fire, cloudburst, rainstorms, and hailstones.

Which will only be the beginning of the suffering of the world, for the remaining 6 trumpets will be also blasted, and then the 7 bowls of Revelation will be poured in correlation with the Feast of Tabernacles in New Moon 7 Day 15 for 7 days.

By Christian Gaviria Alvarez July 14, 2019
2 questions
Wisdom of God Equipping the people of God with understanding